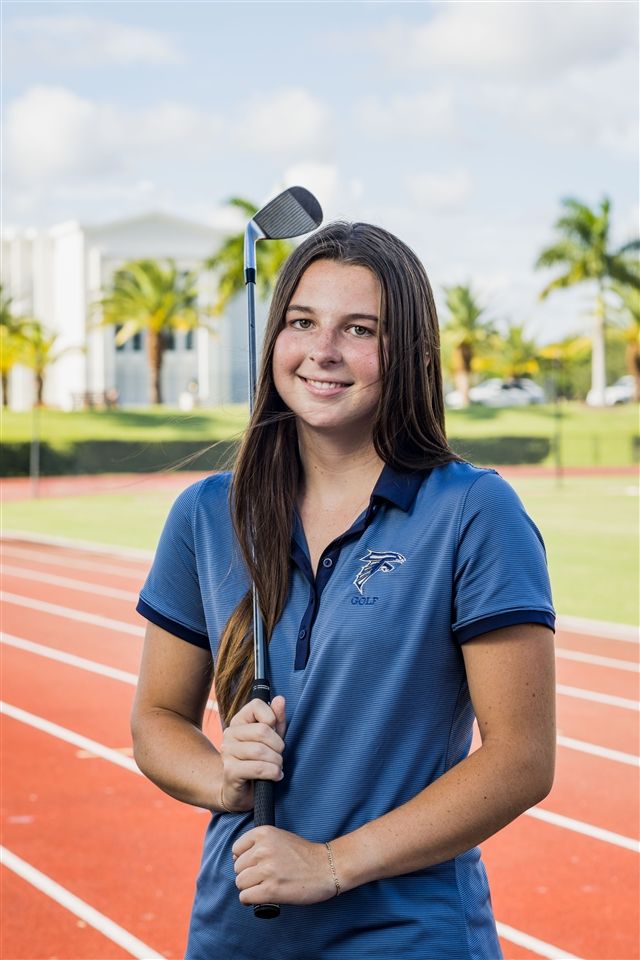 9/9/2022
Soccer since the age of two. Golf since the age of eight. Lacrosse since the 8th grade. Traveling across the country playing flag football. Sports are engrained in the life of senior Sydney Powell. Powell has starred as a three-sport varsity athlete in golf, soccer, and lacrosse since the 9th grade. Powell was also selected to the Varsity Girls Golf and Varsity Girls Lacrosse teams while still in Middle School. How does Powell manage to balance all three sports along with a rigorous course-load? “Truly understanding the value of hard-work,” Powell quickly responds. Head Varsity Golf Coach, Traci Holstein, is quick to also point out Powell’s natural athleticism and how she can always count on her.

“It has been amazing to see my progress and know that it is all due to my hard work,” Powell reflects, noting that being a three-sport athlete has also provided her lessons on how to manage her time better and how to be a valuable member of the Palmer Trinity community. Through her time as a Falcon, Powell has worked for many accomplishments. Her favorites include advancing to the FHSAA State Championships for golf where she was able to play in front of Jack Nicklaus, last year’s Varsity Girls Soccer playoff run to the Regional Championship, and defeating Westminster Christian on their Senior Day in lacrosse.
As if three varsity sports were not enough, Powell credits flag football for being a large part of her life and opening many new connections. Playing quarterback, she has attended national Pro Bowls and won a national championship. She does so while remaining true to herself and knowing that her hard-work and dedication to her teammates will lead her to success.
Powell’s hard-work isn’t limited to the playing field. Powell co-founded an organization called Kids Interacting Sharing Shirts (KISS). “I recognized the deficiency in uniforms across underserved schools across Miami, and realized the benefit a single polo could give them. I have collected well over six thousand uniform polos, sewn the Miami-Dade Public School logo on, then distributed them to schools in underprivileged neighborhoods. Powell also works with Twenty Little Working Girls, volunteering all over Miami tutoring students, serving food at women’s shelters, and planting gardens under the metrorail.
Powell is excited to begin applying to colleges this fall, as she plans to double major in mathematics and economics with a finance minor, while also considering a pre-med track. Outside of Palmer Trinity, Powell loves to go out boating, wake surfing, and sailing and relaxes by playing cards. Her favorite movie is Mamma Mia!, favorite food is spaghetti and meatballs, and favorite artist is Taylor Swift.
Be sure to come out and support Sydney and the rest of the Varsity Girls Golf team this fall and later this year on the Varsity Girls Soccer and Lacrosse teams!
Go Falcons!
Back