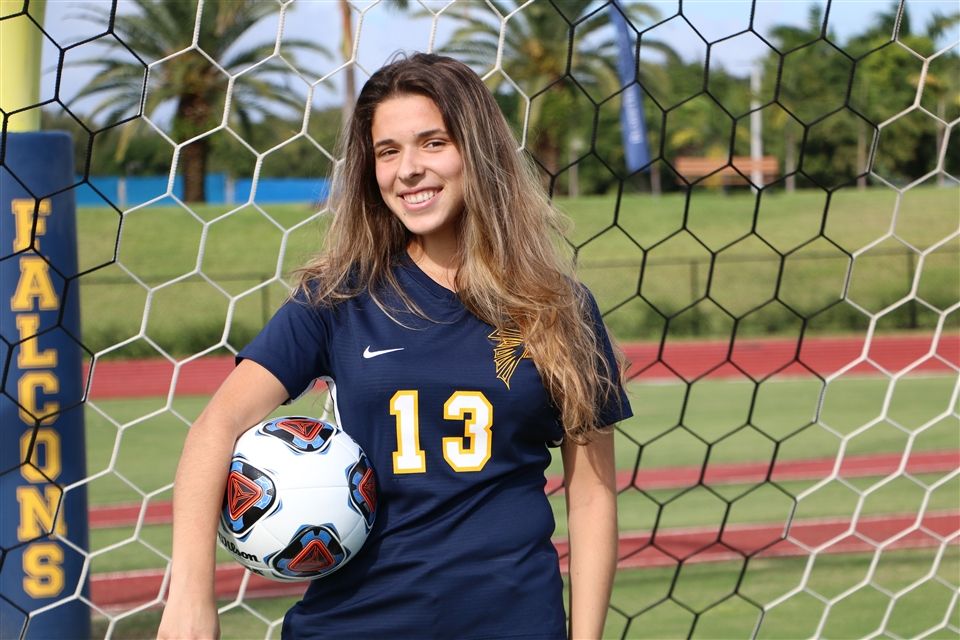 2/15/2020
As President of the Executive Student Government Association, Carmen Gonzalez Del Valle entered the school year with many goals and aspirations to lead Palmer Trinity to new heights, including to create new traditions and activities that would get students engaged. Gonzalez Del Valle has kept true to her word and received great feedback from students and faculty alike, particularly in regards to her Color War concept during Homecoming.

However, Gonzalez Del Valle has much more to balance than just her responsibilities within the SGA and maintaining her high marks academically. Carmen is a three-sport varsity athlete, as she has been every year since she was a freshman, running Track & Field, Cross Country, and starting on the Girls Soccer team. Additionally, she plays club soccer outside of Palmer Trinity. A soccer player since the age of three and a runner since she was four, Gonzalez Del Valle has created a schedule that helps her stay on top of all of her responsibilities and excel in each activity. Varsity Cross Country and Track & Field Head Coach Tammy King attests to Carmen’s elite ability to manage the work load and prides her “commitment, discipline, and dedication” as she grew from an “inquisitive student to a mature leader”.

As a senior, Carmen has taken her game to the next level. After qualifying for the FHSAA State Championships in Cross Country, she has become a leader on the Varsity Girls Soccer team. Not only has she excelled statistically as she is tied for the team lead in goals (8), is third in assists (4), and leads in shots (32) and shots on goal (21), Gonzalez Del Valle has used the lessons learned throughout her years on the team since she was in 7th grade to become a vocal leader to create a strong and united team.

In addition to her role within SGA, Gonzalez Del Valle has served as Spirit Chair, evidencing her passion and love for Palmer Trinity. Outside of school, Gonzalez Del Valle participates in a plethora of community service projects including Big Brother Little Brother, Best Buddies, and Breakthrough. She also uses her leadership and athletic prowess to coach soccer to elementary students.

Gonzalez Del Valle, who has traveled to 42 out of 50 U.S. states and notes that her favorite food is pasta, favorite artist is Justin Bieber, and loves the movie Forever My Girl, is looking forward to the next chapter where she hopes to study political science and ultimately attend law school in Washington D.C., New York City, or Boston.
Be sure to support Carmen and the rest of the Falcons as the Girls Soccer team has advanced to the Regional Semifinals. Upon completion of the soccer season, Gonzalez Del Valle will immediately head into the Track & Field season.
Go Falcons!
Back